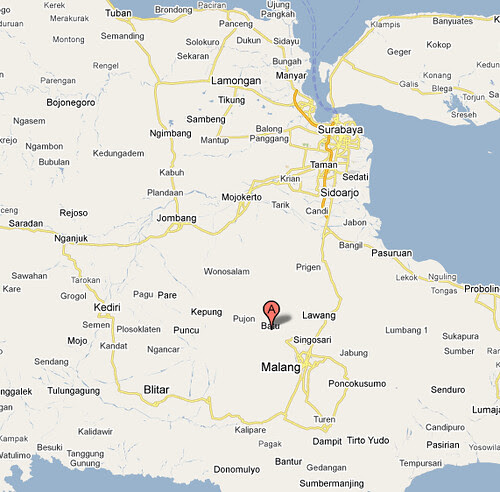 Batu is a city located in East Java, Indonesia. Formerly, It was a part of Malang regency; but in 2001, Batu became an independent city legalized by Act of 11, 2001, when it became a municipal town with its own city mayor and council. [1]
A population of 170,000 people, it mostly consists of Javanese and Madurese ethnics. The town used to be a recreation place for the Dutch colonial officers in the Dutch colonial area (before 1945).
A historic colonial-style hotel is the Kartika Wijaya, founded in 1891 by the Sarkies Brothers.

Batu is well known by its tourism. Some of the tourist spots are:
Cuban Rondo: waterfall
Jatim Park (Jawa Timur Park): a place for learning and playing.
Selecta: pool and garden.

The cool, fresh hill town of Batu was a retreat for the Dutch in colonial days. Similarly, these days wealthy local business people from Surabaya and Malang have weekend houses up here whilst the less fortunate visit on a more casual basis. The area is also a major agricultural centre with apple orchards everywhere and a large number of orchid nurseries.
Until 2001, Batu was administratively part of Malang but since that time it has been a municipal town in its own right.
Batu and the nearby town of Selecta (specifically constructed as a tourism venue in 1928) sit on the slopes of Mount Welirang and Mount Arjuna (Gunung Welirang and Arjuna) about 20 km to the west of Malang. Batu, Selecta and the surrounding villages make for a charming place with much that will appeal to visitors and a couple of days exploring this beautiful area is a worthy part of any vist to Java.

Email ThisBlogThis!Share to TwitterShare to FacebookShare to Pinterest
Labels: Batu